"Hand of Hope!" A Medical miracle 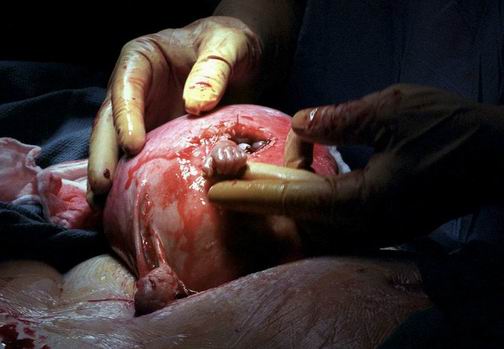 The photo, which first appeared in USA Today on Sept. 7, 1999, quickly spread across the globe as proof of development in the womb and was later cited during congressional debates on the Partial-Birth Abortion Ban Act, which passed in 2000.

No wonder they say the world still holds wonderful miracles ...
A picture began circulating in November. It should be "The Picture of the Year," ...or perhaps, "Picture of the Decade." It won't be. In fact, unless you obtained a copy of the U.S. paper which published it, you probably would never have seen it.The picture is that of a 21-week-old unborn baby named Samuel Alexander Armas, who is being operated on by surgeon named Joseph Bruner. The baby was diagnosed with spina bifida and would not survive if removed from his mother's womb.


Little Samuel's mother, Julie Armas, is an obstetrics nurse in Atlanta.She knew of Dr. Bruner's remarkable surgical procedure. Practicing at Vanderbilt University Medical Center in Nashville, he performs these
special operations while the baby is still in the womb. Duringthe procedure, the doctor removes the uterus via C-section and makes a small incision to operate on the baby. As Dr. Bruner completed the surgery on Samuel, the little guy reached his tiny, but fully developed hand through the incision and firmly grasped the surgeon's finger. Dr.Bruner was reported as saying that when his finger was grasped, it was the most emotional moment of his life, and that for an instant during the procedure he was just frozen, totally immobile.

The photograph captures this amazing event with perfect clarity. The editors titled the picture, "Hand of Hope." The text explaining the picture begins, "The tiny hand of 21-week-old fetus Samuel Alexander Armas emerges from the mother's uterus to grasp the finger of Dr. Joseph Bruner as if thanking the doctor for the gift of life."

Little Samuel's mother said they "wept for days" when they saw the picture. She said, "The photo reminds us pregnancy isn't about disability or an illness, it's about a little person" Samuel was born in perfect health,
the operation 100 percent successful. Now see the actual picture, and it is awesome...incredible....and hey, pass it on! The world needs to see this one !

After reading this touchy Article it came in my mind that where is this Little Samuel nowadays.So i researched little bit and found some recent pictures of him and some more facts about the story behind the picture.& some one even made a (facebook page of hand of hope) Here is more to satisfy your curiosity.

Story of the "Fetal Hand Grasp" Photograph
As a veteran photojournalist in Nashville, Tennessee, I was hired by USA Today newspaper to photograph a spina bifida corrective surgical procedure. It was to be performed on a twenty-one week old fetus in utero at Vanderbilt University Medical Center. At that time, in 1999, twenty-one weeks in utero was the earliest that the surgical team would consider for surgery. The worst possible outcome would be that the surgery would cause premature delivery, and no child born earlier than twenty-three weeks had survived.
The tension could be felt in the operating room as the surgery began. A typical C-section incision was made to access the uterus, which was then lifted out and laid at the junction of the mother's thighs. The entire procedure would take place within the uterus, and no part of the child was to breach the surgical opening. During the procedure, the position of the fetus was adjusted by gently manipulating the outside of the uterus. The entire surgical procedure on the child was completed in 1 hour and thirteen minutes. When it was over, the surgical team breathed a sigh of relief, as did I.
As a doctor asked me what speed of film I was using, out of the corner of my eye I saw the uterus shake, but no one's hands were near it. It was shaking from within. Suddenly, an entire arm thrust out of the opening, then pulled back until just a little hand was showing. The doctor reached over and lifted the hand, which reacted and squeezed the doctor's finger. As if testing for strength, the doctor shook the tiny fist. Samuel held firm. I took the picture! Wow! It happened so fast that the nurse standing next to me asked, "What happened?" "The child reached out," I said. "Oh. They do that all the time," she responded.
The surgical opening to the uterus was closed and the uterus was then put back into the mother and the C-section opening was closed.
It was ten days before I knew if the picture was even in focus. To ensure no digital manipulation of images before they see them, USA Today requires that film be submitted unprocessed. When the photo editor finally phoned me he said, "It's the most incredible picture I've ever seen."
- Michael Clancy (photographer of the hand of hope)
check his website
[Image:Michael Clancy ]